It's 5:30am and I'm sitting here reading the paper, drinking coffee, blogging, and getting myself mentally prepared for the very busy day to come.  It's supposed to be a balmy 70 degree day (more like Thanksgiving in Florida), before the cold that many of you already have moves in for a not so balmy 40 degree Friday - may have to build my first fire.  Here's a post from a meal we had a day or two ago.

I’d assumed we were having leftovers for dinner, but the chef wanted to make pizza and I reluctantly agreed. :-)

The other day, I'd made Chicken Pepperoni and used part of several items, so we had containers in the fridge to be used. And what better way than the blank canvas of a pizza crust – Thin Pizza Crust Napoli Style, which we’ve used before and looks like oversized Naan bread. We get them at Walmart.

For this version, it was marinara, from the just opened jar of Bertolli with some additional pizza spices sprinkled on, followed by opened artichoke hearts and mushrooms, and diced pepperoni from the newly opened stick. It then got onions, sweet peppers, diced garden maters, sliced olives, and mozzarella & asiago cheese.  Pizza is like vegetable soup - just go thru the fridge, freezer and pantry and add what you have and strikes your fancy. 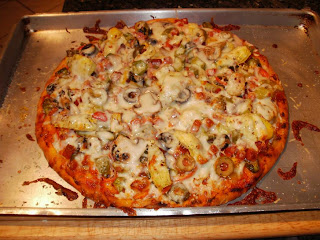 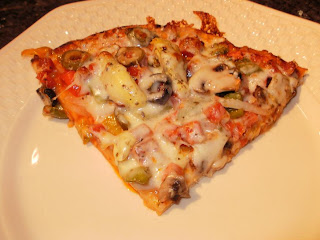 It was very good and we ate all but one piece, with Bev commenting that she believed she could eat pizza every day - I could sure eat it once a week.  When she makes it from scratch, we always make extra so we can reheat it for breakfast - which we both like.

Hopefully you can see a little difference in picture quality as I finally took the time to learn how to shoot close ups with Bevs camera.  Not as good as the SLR cameras, but better than I was getting.  There must be a lot of folks taking shots of food as the setting for close ups on my camera was "close up" but on this camera it is "cuisine" - food bloggers rule.