My normal BBQ day for November was to be Wednesday the 3rd, but because we were at Ft. Knox, I postponed until Saturday. I ended up trading a 64* day for a 40* one – which is fine except I couldn't wear shorts.

I had a pretty big load and ended up running both smokers. I ran the Stumps overnight to cook the big meat at 225* (2 pork butts & 1 brisket), then moved them to the Klose offset at the same temp, while I cooked 9 slabs of baby backs, 6 chubs of breakfast sausage, and pork tenderloins on the Stumps. When the big meat was done, I cooked a whole turkey and 2 slabs of beef ribs and a couple pounds of bison short ribs on the Klose during the afternoon. And then I cooked wings, thighs, cornish hens, and an 8# prime rib on the Stumps when the pork ribs were done in early afternoon.

But before I could cook anything, I had to make up a few things. I cooked the beef and bison ribs per Chris’s procedure over at Nibble Me This, which required some pre-make, I used my special (given to me) recipe for prime rib rub & Wolfe Citrus on the turkey and cornish hens, both of which I was out of.

The finished products looked like they have in the past so I didn't take shots of anything but the bison ribs, but here's a shot of everything wrapped and ready, except 3 rib slabs, a butt, a brisket, and the 6 chubs of breakfast sausage, which had been picked up or were already in the fridge.  The big one in the middle is the turkey and to it's right is the rib roast. 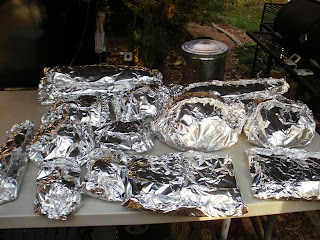 It was definitely a busy day – maybe the most I’ve cooked at one time, plus cooking with wood in the Klose requires regular attention to the fire, especially on a cold windy day.  When I got done I was achy and stiff, so I'm going to have to make some changes in my future gameplan, as this was not a fun day.

I pretty well took the next day off to recover.

Since we had a late lunch of pulled pork and slaw, and Bev baked bread that we had to sample, we didn't really eat an official meal but just grazed.  I had a bison short rib to test it, but after fooling with meat all day, all I wanted was a salad. 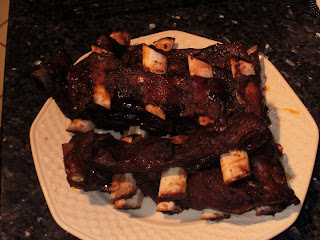 The bison rib had a good flavor but was tough as I feared it might be.  I thought if I cooked them any longer, they would just dry out, so the bottom line is I should have braised them as originally planned, but I had to try and smoke them - they just don't have enough fat for smoking.  Don't know if they are salvagable at this point - maybe a little steaming in the pressure cooker.

There must be something going on with the alignment of the stars and not just our time change - Bev came wandering out of the bedroom this morning, fully dressed at 5:10am - even on DST, this is more than 2 hours early for her.

Have a good day and thanks for stopping by.