The last time we had these, Bev made the dough and we cooked them on the grill, but this time we decided to go the easier way and use pre-made crust. It’s called “Thin Pizza Crust – Napoli Style” and since it’s in the same packaging as the naan bread we usually buy, I assumed it was just a larger version of naan. But after studying the label, it actually has different ingredients, but I suspect the taste to be very similar.

Since the weather is cool and we don’t mind adding heat to the house, we cooked it in the oven as the grill would likely have overcooked the bread bottom. For this one, it was built as follows - brushed on olive oil, finely diced garlic, shredded mozzerella and asiago cheeses, sliced tomatoes, thin red onion, sliced olives and sliced fresh basil. After baking in a 400* oven until the cheese melted, it was removed and topped with grated parmesan. It’s not a great shot on the foil, but it was right tasty. 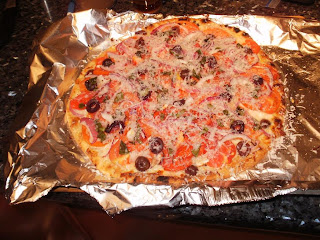