One of our sons is a career soldier in the US Army, which you may know, and this week, he was promoted to Lt. Colonel.  He enlisted right out of high school, believing he was going off to adventure camp per the recruiting brochures – a rude awakening ensued shortly after he joined.  When his enlistment was up, he went off to college, but decided he liked the military, just not as a private.  So while in school, he went through ROTC and upon graduation, was commissioned a Second Louie.
He has worked very hard and put in an inordinate amount of hours - 12 hour days on a regular basis.  He has been stationed several places in the states, as well as Germany, Korea, and Iraq and in January he heads for Afghanistan.  You don’t really know what the military folks sacrifice for us until you’re close to one and my hat’s off to all of them – even if they’re not in combat.
Anyhow, Bev pinned on his first bar of rank, and has only missed one, so no way we’d miss this opportunity when he’s so close as Ft. Knox, Ky.  Bev, his Aunt Pat, and I made the 5 hour drive up on Wednesday morning, attended the ceremony and the after-party and came back on Thursday.  I went cross-country rather the interstates to see some of the pretty country, but it was rainy and foggy the entire way, so we saw very little.
The event went well and a good time was had by all.  This is wife, Beth, and Bev putting the new rank on his shoulders while his boss looked on. 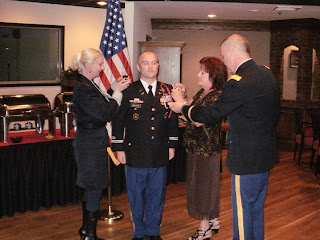 This is a shot of the whole family and the Colonel after the ceremony. 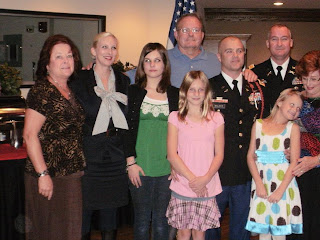 Sorry about the graininess and eye problems in the photos, but I'm only up to basic operation of Bev's camera.

One of the things that surprised me was the location of the US Bullion Depository.  I'd always thought by being at Fort Knox, it would be in the middle of the post with soldiers all around it.  It' actually sits just outside the post gate, but inside it's own very serious looking security fencing with signs saying "Do Not Photograph" - hence no shots of it.  It was beautiful on the trip back and we did get to see some nice countryside across south central Kentucky.
Have a great day and thanks for stopping by.
Larry
Posted by Big Dude at 6:38 AM