Bev had gotten a couple of rib eyes out of the freezer and decided she wanted Steak Diane (because of the flambé I suspect) so we began looking at recipes and settled on the one from Food.com.  Per Wikipedia - “Steak Diane is an American dish of a pan-fried beefsteak with a sauce made from the seasoned pan juices, generally prepared in restaurants tableside, and flambéed. It was popular in the middle of the 20th century, but was considered dated by 1980.”

Bev’s favorite steak is a filet and her least favorite is ribeye because of the amount of fat in them so I decided to see if I could help this by trimming the outside and removing the big fat layer between the two muscles. 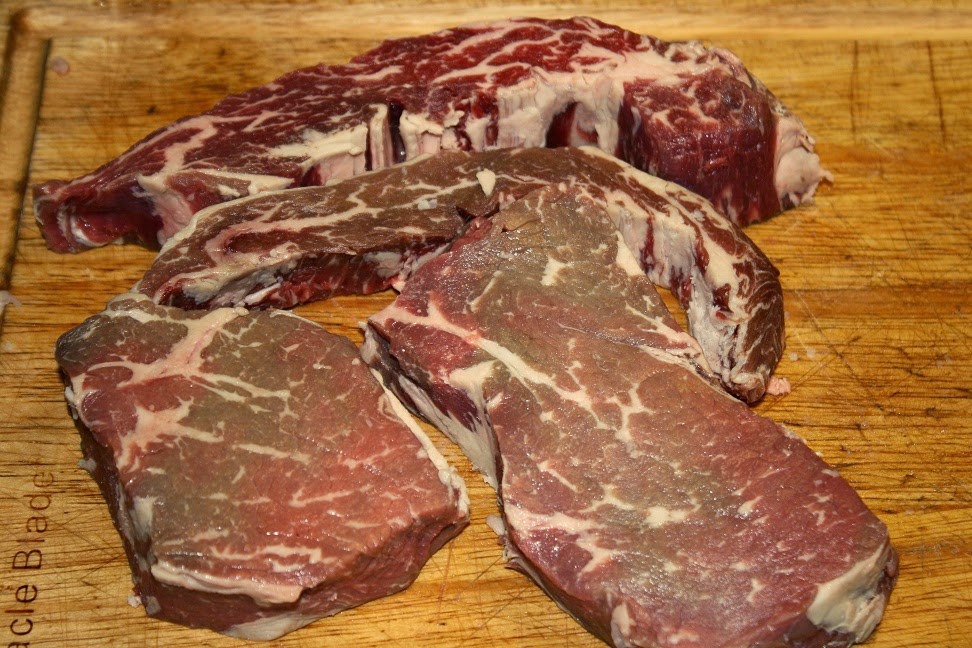 The recipe below has the sauce ingredients doubled so we would have plenty for the pasta we used as a side dish (last of the leftovers from the blogger party).

Instructions:
1. Heat oil in a 12" skillet over medium-high heat. Season steaks with salt and pepper, and add to skillet; cook, turning once, until browned on both sides and cooked to desired doneness (see notes), about 4 to 5 minutes for medium-rare. Transfer steaks to a plate, and set aside. 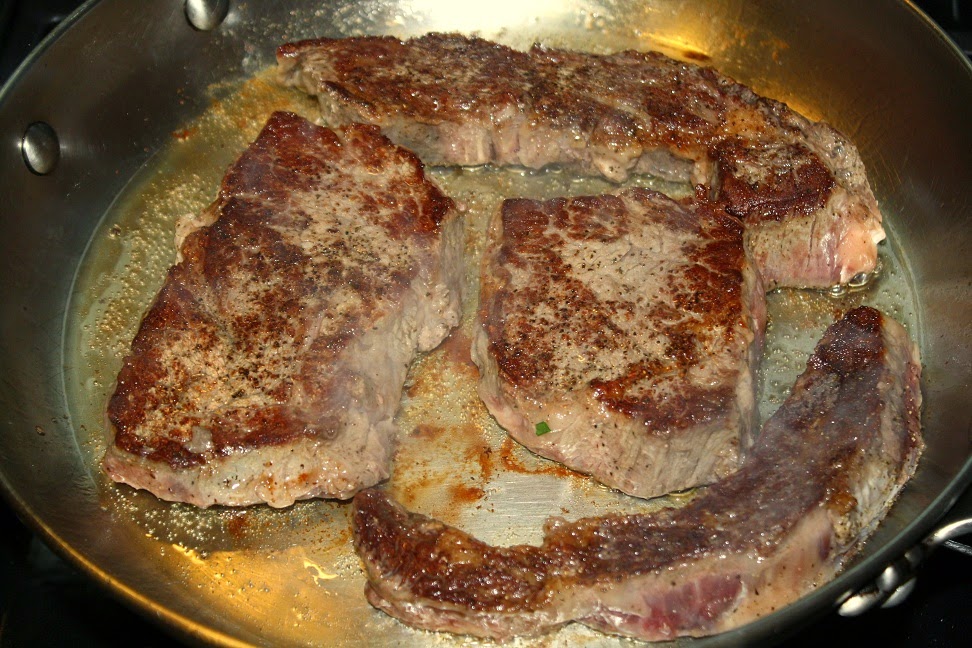 2. Return skillet to high heat, and add stock; cook until reduced until to ½ cup (1 cup for me), about 10 minutes. Pour into a bowl, and set aside.
3. Return skillet to heat, and add butter, garlic and shallots, and cook, stirring, until soft, about 2 minutes. Add mushrooms, and cook, stirring, until they release any liquid and it evaporates and mushrooms begin to brown, about 2 minutes. 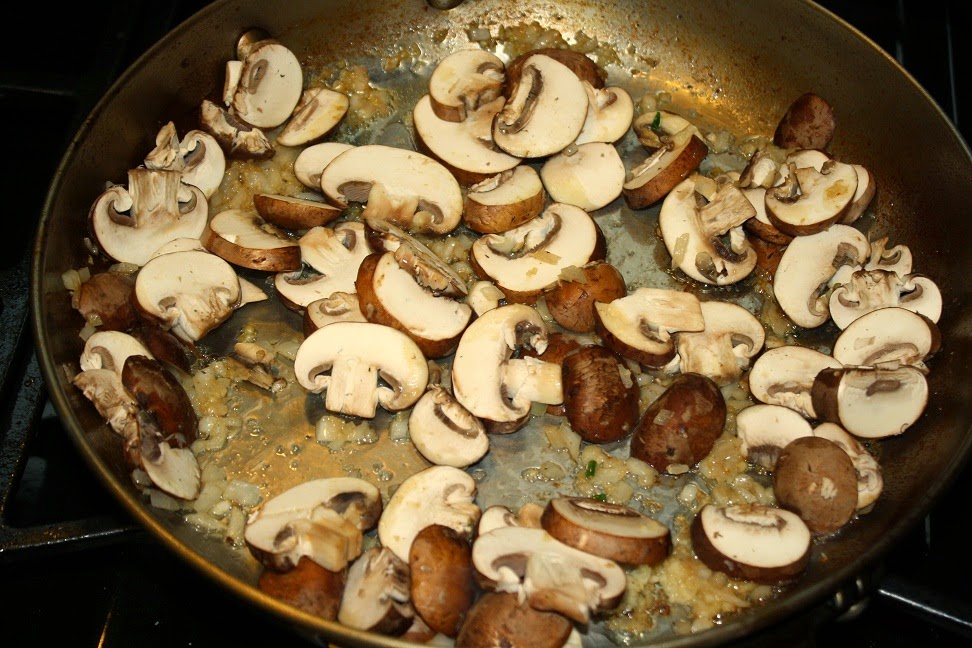 4. Add cognac, and light with a match to flambé; cook until flame dies down.  Below was supposed to be a flambé shot but it didn’t pick up the flame. 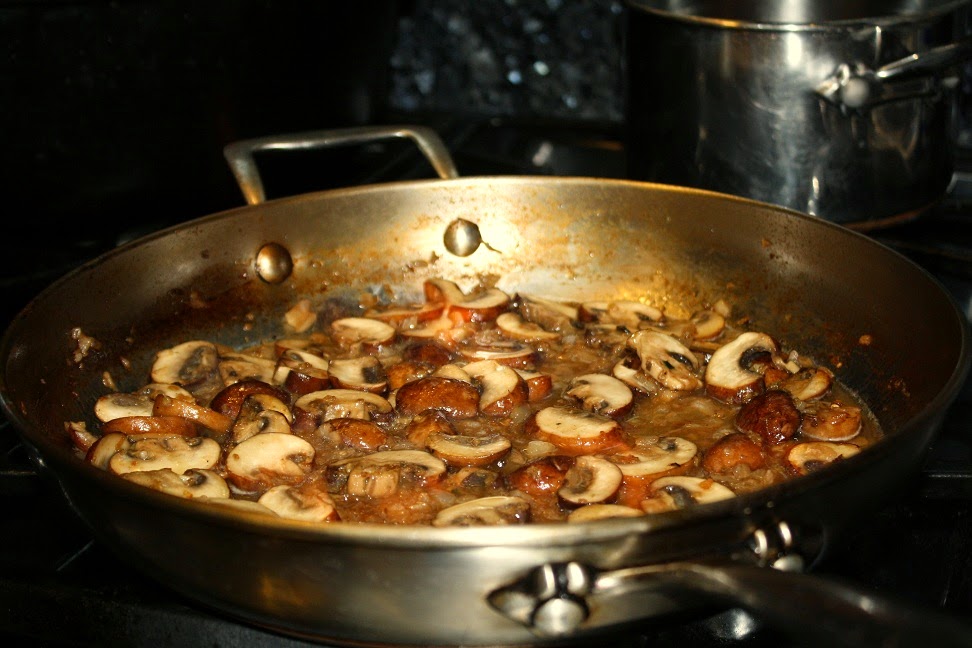 5. Stir in reserved stock, cream, Dijon, Worcestershire, and hot sauce, and then return steaks to skillet; cook, turning in sauce, until warmed through and sauce is thickened, about 4 minutes.
6. Transfer steak to serving plates and stir parsley and chives into sauce; pour sauce over steaks to serve. 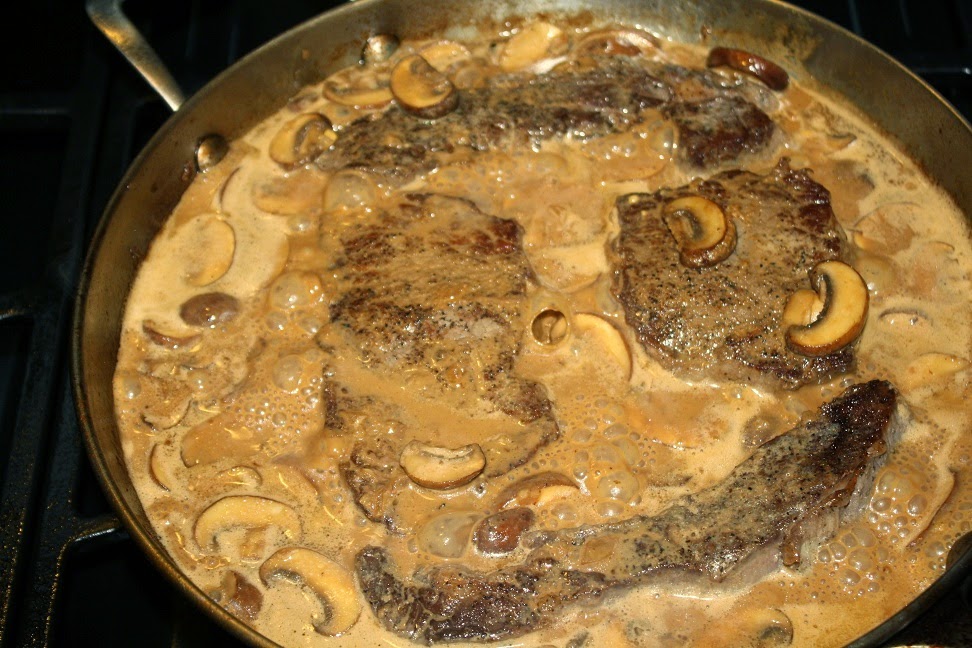 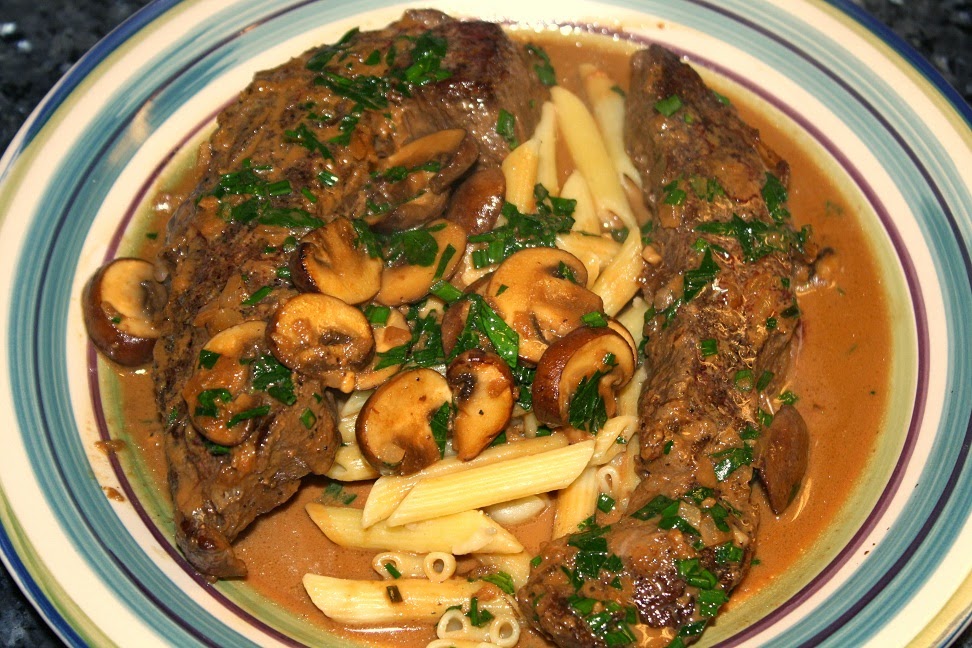 Notes:
1. I cooked the meat to less than medium rare then took them to the desired temperature when I added them back into the gravy.
2. Trimming the steaks like this worked beautifully and Bev loved the ribeye this way - I gave her and Pat the leaner center pieces and I ate the outer ones.
3. Because I doubled the sauce ingredients, my times were all longer than the ones in the recipe.
4. Next time I will add a thickening agent as the sauce was too runny for the pasta.

Like Salisbury Steak, Steak Diane may now be out of style but it’s easy to see why both dishes were popular at some point.  I don’t remember ever making or even eating Steak Diane and I didn’t know what I was missing.  It was pretty easy to make, totally delicious, and a big hit with all of us.  It will be made again, but next time, I think it will be served with some smashed potatoes.  We also had some broccoli but after eating what was on my plate, I was too full to eat any.