It’s time for a break from Thanksgiving left-overs, so it was something different for dinner last night.

Over in Knoxville, there is a very small, hole-in-the-wall restaurant with maybe six seats, but a good take-out business. Inside is a little old lady from the Mississippi Delta Region who is hand-making Hot Tamales and we just happened to have a package in the freezer.

When she told me where she was from, I had two thoughts – the Mississippi Delta is in Louisiana and tamales in Mississippi? As it turns out she wasn’t speaking of the Mississippi River delta but rather the delta region of the State of Mississippi. Being the geography buff that I am, I came home and did some research. Here’s some info from Wikipedia –

“The Mississippi Delta is the distinct northwest section of the state of Mississippi that lies between the Mississippi and Yazoo Rivers. Technically not a delta but part of an alluvial plain, it has been said that the Delta "begins in the lobby of the Peabody Hotel (in Memphis) and ends on Catfish Row in Vicksburg. Created by regular flooding over thousands of years, this region is remarkably flat and contains some of the most fertile soil in the world. The river delta at the mouth of the Mississippi lies some 300 miles south of this area, and is referred to as the Mississippi River Delta. The two should not be confused, as may happen in some media references or casual conversation.”

Then she told me that hot tamales (she never just said tamales) are big in the delta region and she’d been making them her entire life. Rather than being made in corn husks, hers are rolled in paper and tied with string at both ends and in the middle. She suggested standing them on end in a pot with a little water and steaming until hot, then unwrapping and toping as desired.

I just unwrapped them and warmed in the microwave. I then topped with some homemade chili, chopped onions, and shredded Cabot Sharp Cheddar. Here’s the pic of the bare unwrapped hot tamales and my plated meal. 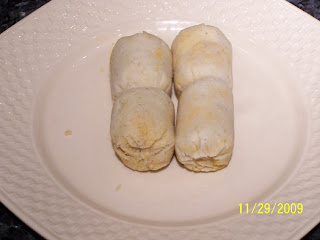 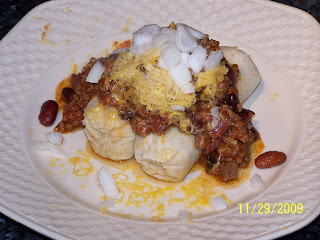 They were very good and a nice change from turkey and such. Now I'm ready for more leftovers.

Have a great day and I like your comments.