A Gourmet Southern Meal Ala Beverly

Late June is a great time for veggies in our area as the summer crops are coming in and some late potatoes are still available.  Bev decided to whip us up a meatless (hard for her) meal of corn, beans, potatoes, and tomatoes (the only part from our garden).  The gourmet part is obviously in the eye of the beholder mouth of the eater.

The local pole beans were cooked with smoked bacon, onion, garlic, and spices; the new potatoes were just boiled in water then mashed on the plate with butter; and the cherry tomatoes were halved.  Now for the corn – growing up, sweet corn was boiled in water and slathered with butter, salted and peppered and eaten from the cob, but since I married Bev I’ve discovered fried corn.

The fresh local corn was cut from the cob, then cooked in a skillet with butter and S&P, sometimes until just barely cooked, like this, and sometimes cooked until a little caramelized.  This method preserves all of the flavor that is removed by the boiling process and can be cooked to the same level of doneness as boiled or more if you prefer.

If you’ve seen Bev, you know she is a pretty small person but this is her plate which was all eaten.  My plate looked similar but without the tomatoes and I had seconds on the corn. 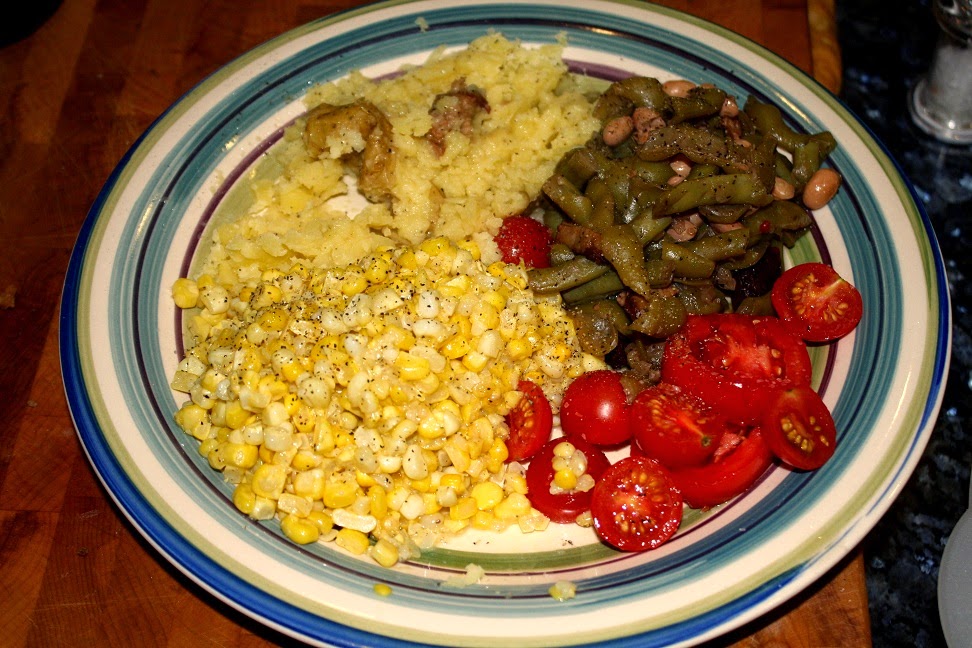 The meal was absolutely delicious and if you’ve never cooked corn this way, you are missing a real treat.  Bev used a half stick of butter for five ears of corn but this can be adjusted to your taste and dietary desires – I’m a disciple of Paula Deen so more is better – notice the word margarine was never mentioned in the above.