After 10 days on St. Maarten and eating seafood nearly every day (at least for me), I was pretty surprised when Bev suggested sautéed crappie for our first home meal – but hey, I’m a big fish fan and said let’s do it.  Later that morning, I was reading blogs and came across Marguerite’s recipe for Barbeque Shrimp A La Marguerite which sounded similar to the Creole shrimp SIL, Pat, had in St. Maarten, so I decided to make it as an appetizer.


I had a pound of shrimp so I cut her recipe in half and made a few changes to end up with this:


Place the butter in a bowl and add the Essence, lemon juice, garlic, sriracha, and Worcestershire sauce. Stir to mix well and set aside.


Place the oil in a large skillet and heat over medium high heat. Add the shrimp in a single layer and flip when they begin to curl and turn pink, about a minute. As soon as the second side is pink, another minute, remove from the skillet and set aside. Add the white wine to deglaze the skillet, scrapping up all the sucs, and allow it to cook down by half - doesn't take long.


Reduce heat to medium low and add the butter mixture to the skillet followed by the chopped onions and parsley as the butter is melting. Once the butter is melted, return the shrimp to the pan and toss to coat well to coat and reheat.  Serve immediately. 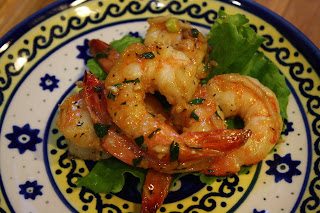 For the fish - after drying, I seasoned with S&P and Emeril’s Essense.  Then I sautéed it in oil until brown, then flipped and added this recipe from About.com, Southern Food, around the fish pieces.


And cooked until the butter was melted and hot at which point the fish was done. 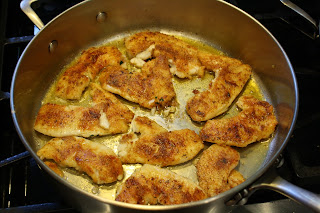 We served it with boiled potatoes, mashed on your plate, with butter or topped with the remaining sauce from the shrimp. 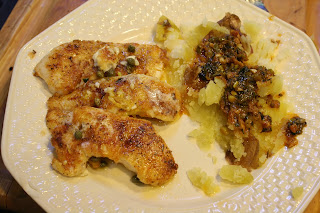 Bev’s comment was that this was better than any meal in St. Maarten (she said it several times) and as much as I liked the creole shrimp on the island, I preferred Marguerite’s and it will be made again.  The crappie sauce was also very good but a little too tangy and I’ll add more capers next time as shown in ( ).  All in all, it was a delicious welcome home meal to Almost Heaven South.


One year ago: How I Plant Tomatoes


Two years ago: Fields Of Yellow