For getting the day off to a good start. While breakfast food is my favorite, I'm happy with quick and easy most of the time with the occasional more complicated fare - corned beef hash and eggs for example. For this morning, I dug through the fridge to see what was on hand and came up with a satisfying meal. I found some smoked bologna, sliced it crossways to ensure smoke flavor in the middle and fried in a little EVOO. (It's the picture - not your eyes) 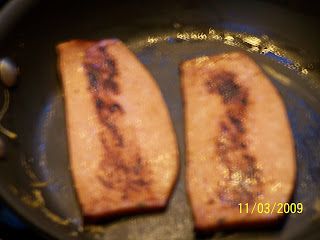 While it was cooking I cut a thick slice of homemade bread, topped it with sliced Cabot cheddar and into the toaster oven it went. I slid the bologna up the side of the skillet to make room for the fried egg. When all was done, it was the cheese toast, then the bologna, then the egg. Got me all fixed up to move a rick or so of hickory (smoking wood) later today. Beverly had the same basic meal but built differenty - a bologna, fried egg and cheese sandwich, with lettuce and mayo. Here's mine. 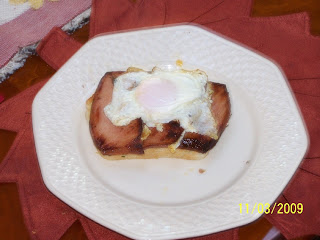 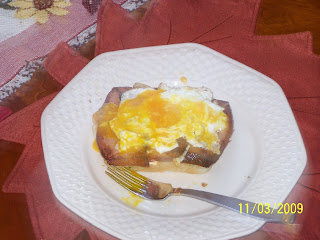 The bad news is these pics are again blurry, the good news is that after taking them I figured out I had the camera on the wrong setting. As easy as this camera is to use, I think I've figured out that I need one that will take good pictures in daylight or dark without me making any adjustments and will go ahead and snap a few when-the-eatin-starts pics whether I ask it to or not. I guess in the blogging world, the cooking and eating are more important to me than the photographing - I can live with that.
Posted by Big Dude at 1:50 PM