We had left a couple of grocery bags of paprika peppers in the garage and Bev decided it was time to clean them up and roast today. I was headed out to eat up the grill when I decided I should see if we had anymore in the garden. Even though we’ve had several good frosts, and I’ve posted the garden if officially done, the plants had somehow survived and I picked a peck basket full of paprikas, anaheims and bells – I couldn’t believe it. So I ended up with about ¾ bushel total of green and red to roast- mostly anaheims. We’ve been wanting to make roasted red pepper soup and now have the main ingredient for it.

And it was a beautiful day for it. You know you’re having great mid November when you’re standing in front of the grill in shorts and sleeveless T-shirt and mentally complaining about being too hot – it's predicted to get back to more normal starting today. I didn’t take any pictures as I’d shown several in the past.

Now that I've cooked all that BBQ this weekend, it’s time to eat some more of it and Monday it was pork tenderloin. Bev had a pineapple that had been ripening in the garage for a few days, so she whipped up a salsa to go with the pork. She used this recipe we found on the internet at http://southernfood.about.com. The cilantro drew us to this one.

Combine all ingredients, cover and refrigerate for an hour or more.

We slowly reheated the pork in its foil wrap in the toaster oven to minimize additional cooking and it came out still moist and pink. I had pulled it off the smoker around 143* internal temp. We had one loin with herbs and one with BBQ rub and the salsa worked well with both. We sided the pork with some salad and baked sweet potatoes from the garden and I grilled a few slices of the pineapple for Alex and her friend.

I liked the salsa and would make it again – if you have a salsa-for-pork (or fish or chicken) recipe that you like, I’d appreciate having it. Here’s a shot of my plate – I forgot the croutons for my Caesar salad, but everything was very good. 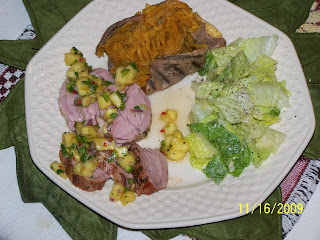 I've always just taken pictures of my plate without doing anything special, but I'm going to start working to improve my plating pics by taking the time to arrange the food better, garnish, etc - I have many good examples to follow on the blogs I read.
Have a great day.
Larry
Posted by Big Dude at 9:01 AM