Gotta Use These Mushrooms

We had some button mushrooms in the fridge that needed to be used and figured not much goes better with them than steak. I did a little freezer diving and came up with a strip for me and a filet for Bev and Alex. Now what to do with the shrooms – normally it would just be sauté them in olive oil and butter and let it go at that, but since we’re having special rolls from A Feast for the Eyes blog, we decided to do a little more with them and make a mushroom sauce (gravy to us ole country boys).

We made the sauce using the following recipe from Cooks.com:

In a heavy skillet, saute mushrooms in butter until they are slightly brown; add onions and continue to saute until onions are golden and transparent; sprinkle with flour and stir to blend. Add half & half, stirring a little at a time, simmer until thick and creamy. Add Worcestershire sauce, garlic powder, salt and pepper.

A couple pics of the process – would have preferred cremini’s but these are what we had: 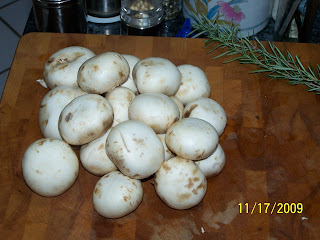 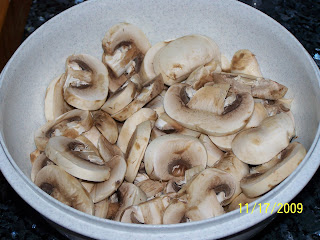 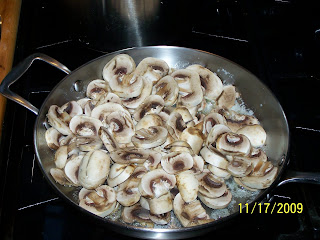 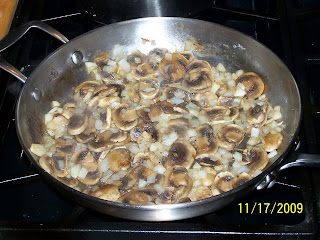 I had to go cook the steaks and forgot to take the finished sauce pics. I liked the sauce fine, but the button mushrooms don’t have enough flavor for this use. I’ll use something more potent ones next time and just sauté the buttons when we have them. We added a little Kitchen Bouquet to get the darker color.

Grilled up the steak to medium rare on the gasser and rested about 10 minutes.

Sided with Caesar salad and the delicious rolls – a definite keeper recipe. Here’s my plate and a pic of the rolls 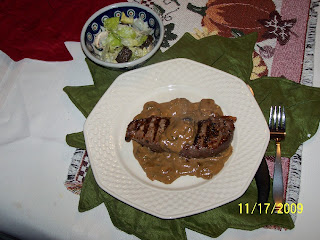 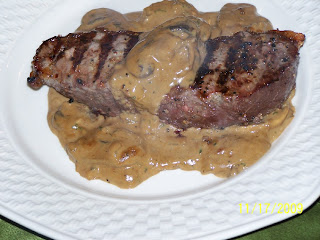 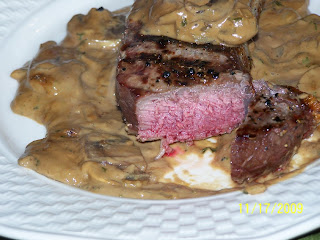 They were especially good for sopping up the good ole gravy. 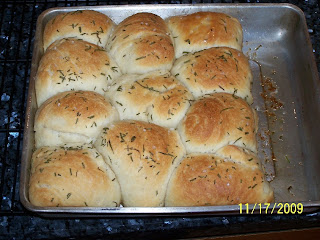 But before the main course, it was some homemade potato soup. We have a special friend who’s been having some health issues and requested some soup the next time we made some and Bev decided to make her up a pot today and we had a bowl as an appetizer. Wow a four-course meal – soup, salad, entrée, and dessert ( banana muffins from last night) – we usually have one-course meals or two at most – so this was a special treat. 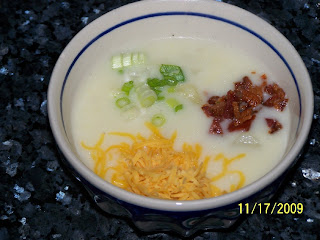 As an aside, I’m excited about my developing crop. This past spring, I bought some inoculated plugs from - Perfect Fungi - for Maitake, Shiitake, and Pearl Oyster mushrooms and spent a couple of days drilling holes in oak and hickory logs, inserting plugs and sealing with beeswax – 300 total. I now have two logs of each with little mushrooms growing on them and can hardly wait til next spring in hopes I’ll be able to harvest some. I also made a bed and sowed some Giant Morels, but realize they are very particular and I may get nothing from them – but it’s fun trying.
Have a great day.
Larry
Posted by Big Dude at 8:42 AM