Krogers had whole USDA choice beef strips on sale last week for $3.99 per pound. It was just too good of a deal to pass up, so we bought a couple of them – total weight of 26 pounds. They were from National Beef Packing Co, which I’d never heard of, so I did a little research. They are owned by U.S. Premium Beef, which in turn, are owned by the cattle ranchers themselves - I’m comfortable with that. 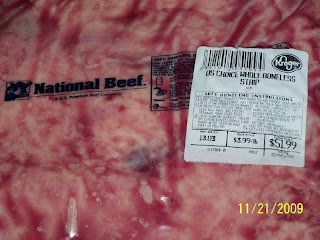 I unwrapped and rinsed them in cold water and they were ready for slicing. After I got into BBQing and tried slicing briskets with the 8” knife that came with our set and I soon realized I needed something more, so it was off to the Smoky Mountain Knife Works in Sevierville. I bought this 12” slicer and a 10” butcher knife, both Forschner, and won the Mundial boning knife, along with two others, in a BBQ contest. I try to make sure my meat knives are stored separately and never get used for anything else and it sure helps them stay sharp. 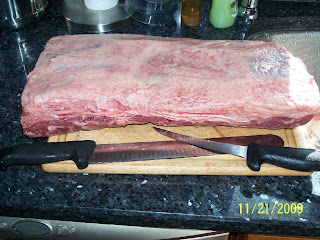 Here’s a pic of the first four steaks all cut about 1 ¼” and they looked pretty good. The fat cap was thin enough as to need no trimming. 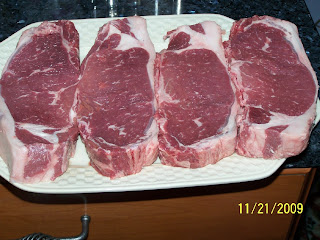 This is the pile from the first strip. 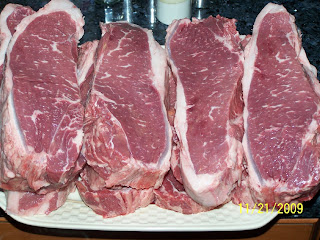 The second one had more of a fat cap and I trimmed it some after slicing. They also looked good and here’s the entire pile – look’s like we ought to throw a big steak cook out. 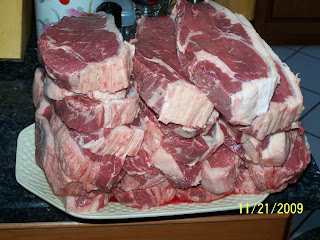 We packaged them in food saver bags and popped in the freezer, except the three shown below.

Wende came down for dinner and we grilled up three of the new strips. Started with a little Montreal Steak Seasoning and Tiger Seasoning (our most used spice). 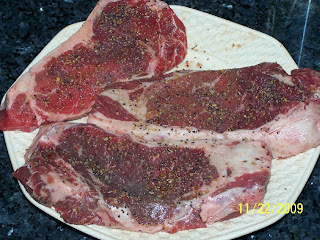 Grilled them to 125* as checked with the Thermapen. Everyone who cooks meat should have one of these to ensure it's cooked just right - Link. After years of hit or miss results using time as a guide, I can now just them to where I want them every time. Amazon occasionally runs specials on them.

Pulled, rested a few minutes and plated them atop some onion-blue cheese sauce from Pioneer Woman Cooks and sided with a caesar salad. Here's a shot of my plate - I'd cut off a couple of slices to taste the meat without sauce. 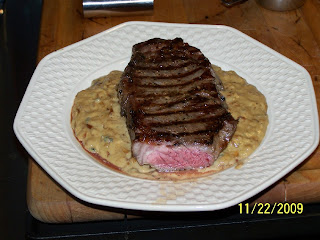 The steaks were very good and I wouldn't hesitate to buy their meat again. The sauce can also be found at A Feast for the Eyes. For you cooks out there both of these blogs are chocked full of great recipes and some interesting life stories.
Posted by Big Dude at 10:00 AM