A few days ago, I had posted about roasting chile peppers and the intent was to turn some of them into rellenos. We got the red sauce and pork out of the freezer, bought the cheese and the plan was to make them yesterday. However, I’ve caught a bad head cold and sure don’t feel like cooking them – or eating them for that matter.

As it turns out, Bev had been wanting to make up some Fugasse Bread since I showed her the recipe on My Year On The Grill’s Blog - Link

Since the recipe calls for peppers, she decided to use the roasted chiles – they needed to be used and it is a little different wrinkle. Otherwise, she pretty well did it the same as Dave, so our pics would look about the same. Here’s the finished loaf. It’s a big one as that’s a regular sized cookie sheet it’s on. 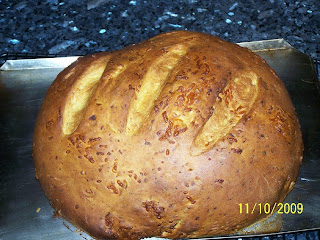 It made a nice crusty loaf of bread, but we didn’t care for the green chiles in it and would stick with the regular sweet peppers. Also, we thought it was a little flat and would probably double the salt next time. These are mostly Bev’s comments as her taster is working better than mine right now.

After vetoing the relleno’s, we still needed something for dinner and so we decided to use the pulled pork and it went real well with the bread. Here’s my open-faced sandwich with a little Tennessee River Blackberry on it. Not an impressive meal, but pretty tasty. I don't use much sauce because for me it's all-about-the-meat. 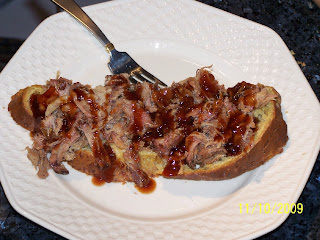 This was supposed to be BBQing day for me, but will have to delay until well so I may not have anything to post about for a couple of days (Whew you say?).
Posted by Big Dude at 8:10 AM