Finally Finished Up The Pepper Crop

I still had three types of peppers sitting in the garage to see if some would go ahead and turn red. Bev sliced up the rest of the sweet ones for the freezer, except for a few of the nice green bells to be stuffed later. I prepped and began dehydrating the paprika’s and roasted the anaheim’s – some for freezing and some for relleno’s. A few of them had color but they’ll still eat well.

When you roast them, start buy sticking a knife in them to let steam escape and cut the stems short so they don’t affect your trying to position them just right (I forgot to do it today). It’s best to do them as hot as possible as the longer it takes to blister the skin the more cooked and therefore more delicate the peppers become (my grill is marginal for this process). This becomes a problem, especially, with the thinner anaheim’s, when you are stuffing them. Poblano’s are meatier and stand up to the process better. Basically, I like anaheim types for green chile’s and poblano’s for stuffing and relleno’s, but I only grew anaheims this year. Here are some pics of mine on the grill. When I had just a few, I used to do them over the open flame of the gas stove, but they trash the stove pretty good. 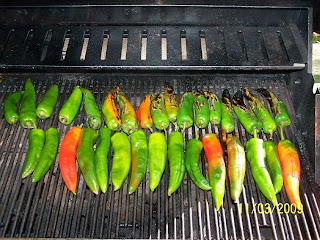 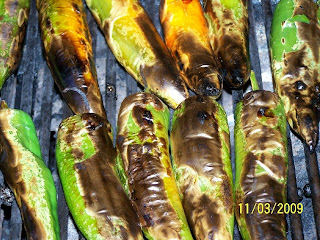 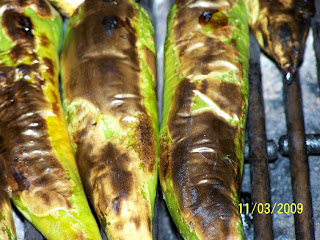 After blistering, they go into a container (bowl, plastic bag, paper bag) to steam for about 10 minutes to help the skin release easier. When you hear them tell it on the TV cooking shows, you just slide the whole skin off in one piece, but I’ve never found that to be true as there is always some skin that doesn’t blister and holds on. Here are the first three into the steaming bowl - the ones in first will be the most cooked. 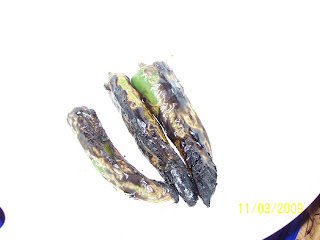 Here's one in the last stage of skin removal. I used to do them under running water, but this doesn't make it easier and it washes away some of the flavor. 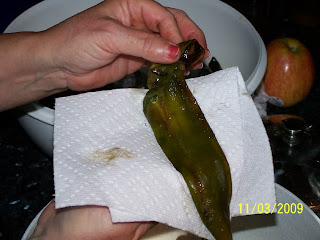 Once peeled, they are ready for use. In our case, we kept about 10 for relleno’s and seeded and froze the rest for any recipe calling for green chile’s. We sometimes make our own Rotel with them and our canned tomatoes. These are the relleno bound ones for Saturday night. 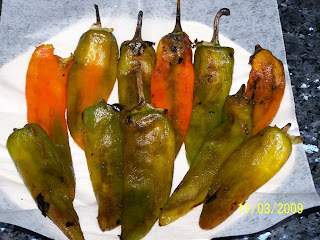