Cleaning Out The Freezer

I’ve been on a campaign to empty out the freezer to prevent things from overstaying their welcome there. Like many people, we freeze items with the best of intentions, they get pushed further to the back and bottom and eventually get tossed. I hate that, even when it’s a box of store bought broccoli, but I really hate it when it’s something into which I’ve invested some time and love.

So for Saturday dinner, it was to be some corned beef I’d made in June and a head of red cabbage from the garden that had been in the fridge since June as well (but it had molded throughout and we had none on hand – a rarity – so no cabbage for this meal). I had corned several briskets and this is the last one – so now I get to do some more. This is one of the two pieces. 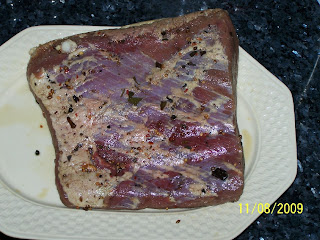 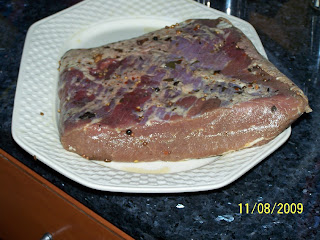 Here’s a pic of the potatoes and carrots ready for the pot. The potatoes are kennebec’s from our garden and it’s time to become serious tater eaters as they are beginning to sprout. 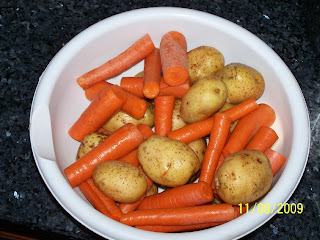 About 8am I just tossed it into the crock pot with some water and additional pickling spices to slow cook all day. I cooked a whole brisket that was cut in half as we like to have lots of leftovers for Reuben sandwiches. 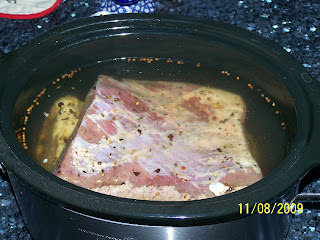 However, as the day wore on and word got out we were going for a pontoon boat ride on this beautiful 70* day, the number of diners went from five to nine. We had plenty of meat, but the crock pot would not hold all of the veggies, so I transferred it to our 16 qt soup pot on very low heat and at 2:30pm, we added everything to the pot and headed for the lake. 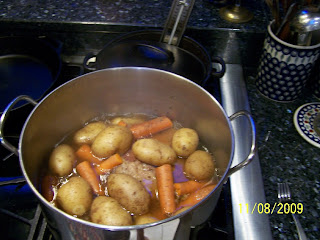 I know it isn’t traditional to have kraut with corned beef, but we had some Bavarian style in the fridge and decided it would have to do. Plus I’d just read Chef Chez’s (http://chez-frontporch.blogspot.com/) Saturday post about BBQ kraut and wanted to give it a try – and I’m sure it’s not a typical corned beef go-with – remember the word eclectic in my blog name. It turned out to be pretty tasty with the sweet-tart combo.

Here’s a pic of the bowl of grub. The brisket got too done to slice, so we served it in chunks. 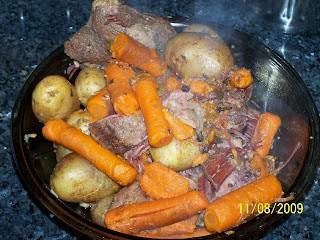 At the request of a friend who was dining with us, Bev whipped up a 12” skillet full of Mexican cornbread that was delicious. 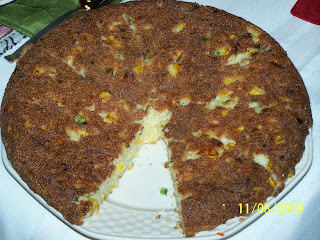 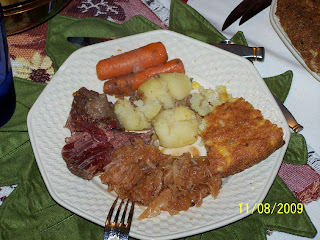 Bev wanted to try a new pumpkin pie recipe out on us as a potential for Thanksgiving and it was outstanding. Here are a couple of pics and the recipe. 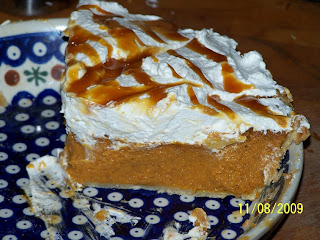 Pour batter into 3 unbaked pie crusts and bake in a 325 degree oven for about one hour or until pie is set (no liquid in center).
Cool and refrigerate.
Top each pie with 2 cups whipped cream, drizzle with light caramel sauce and sprinkle top with 1 teaspoon cinnamon. Refrigerate until serving. Will keep in the refrigerator one week.

Melt butter in a large saucepan and add brown sugar. On high heat, let the mixture come to a full boil for about 2 minutes. Slowly stir in the cream, return to full boil, then remove from heat and pour into a mixing bowl. Stir in the sugar and vanilla and stir until smooth and creamy.

And once again, I failed to have the camera with me to get some of the great scenery shots during the boat ride. I had it with the stuff to take on the ride and we got everything but it – hummm, now that I think about it I wonder if Bev hid it so I couldn’t post a shot of her.
Have a great day.
Larry
Posted by Big Dude at 9:53 AM