One of my favorite things about blogs is access to so many great cooks who are willing to share what they know (I’ve probably said that before and sure I’ll say it again). A couple of weeks ago, I saw this dish on Tomatoes On The Vine – link - and since we like chicken and we like lemon- butter-caper sauce, it sounded like a natural. Here’s the recipe from Velva's site:

Directions:
Season four 1/4-inch-thick skinless, boneless chicken cutlets with salt and pepper. Dredge the chicken in the flour, dip in the eggs and coat with the panko. Fry the chicken in 1/4 cup canola oil, then drain. In a saucepan, cook 6 Tablespoons butter until browned. Stir in 2 teaspoons capers, 2 Tablespoons lemon juice and 1 Tablespoons chopped parsley; spoon over chicken and serve.

A piece of pounded chicken – not to impressive a pic is it? 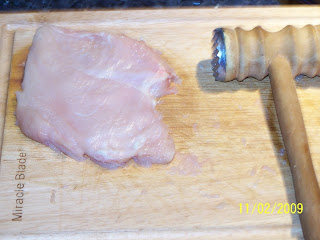 Here is the dredging assembly line ready to go – flour, then egg, then panko – which we use a lot because of the extra crispiness it provides. We even use it with beer battered items. 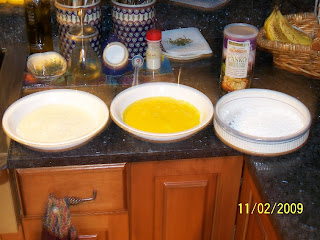 And into the cast iron skillet until golden brown, and in the meantime, I made up the sauce. 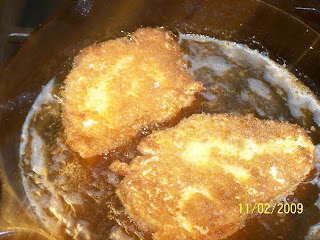 For sides, it was some buttered carrots, which were just scrubbed, steamed, and tossed in butter, S&P and a caesar salad with fresh made croutons. I wanted to do something more fancy with the carrots, but Bev wanted the basic. So, after I dipped hers out I added a splash of the Harvey’s Bristol crème, left from mustard making, and some honey to those still in the pan and tossed til I cooked off the alcohol - they turned out so good that Bev now wants to serve them at Thanksgiving. Wow, I may have a tiny bit of creativity after all – maybe I just need to develop it. 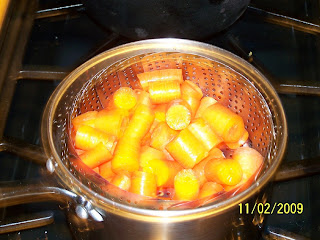 We both liked the dinner and Bev has said at least three times that the meal was delicious. I took a pic of my plate, but it looks like I moved the camera an inch when I snapped it – oh well.

Next for this sauce is the same basic dish but we'll substitute crappie for chicken.

Since the baker was at it again today, we topped everything off with fresh apple pie ala mode, with caramel and chocolate chips for Alex and Bev, ice cream only for me. It was great and she made it without a recipe.
Here’s the pie and Alex’s dish – I must have moved the camera a little here too. Now that I look at them, the pics are all a little blurry – I either have a camera or a wine issue. 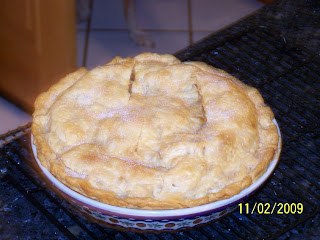 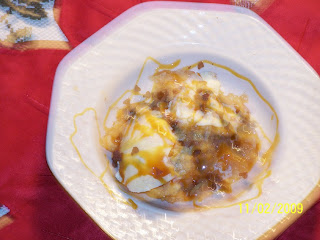 I’d have to say it was a darn fine meal here at Almost Heaven South.
Posted by Big Dude at 9:47 AM