My buddies Joe and Dave came down last week for another version of oysters-n-stuff and I won’t post again about the oysters as they were just our standard raw and Rockefeller.  To go with these we had cold boiled shrimp, cooked a different way, flank steak, and roasted potato wedges.

A couple of weeks ago, Mary from Barefeet In The Kitchen posted her recipe for The Best Shrimp Cocktail and I decided to try her unique (to me) cooking method which I’ve just adapted slightly from her site – check it out for the complete recipe including her spices and recipe for cocktail sauce.  Mary used peeled shrimp but I cooked mine in the shell and used my own spices.

Shrimp Boiling
In a large pot, combine the shrimp, 4 cups cold water, spices and cook this mixture over medium-high heat, stirring occasionally, until the water registers 170 degrees and the shrimp are just barely beginning to turn pink, about 5-7 minutes.

Remove the pot from the heat and add 1/4 cup of fresh lemon juice, along with all of the lemon peels. Cover the pot and let the shrimp mixture rest until the shrimp are completely pink and firm, about 5-7 minutes. Dump into a colander to drain then add the shrimp to an ice bath to quick cool them.  When cool, peel and store in the fridge until ready to serve. 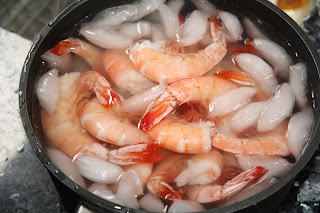 For the flank steak, I marinated for 6 hours in The Best Steak Marinade In Existence and grilled over high heat to an internal temp. of 125* on the thick end.  I show this photo to point out the difference between cooking like this vs. the reverse sear method which would have yielded much less of a well done section around the outside (but it does take longer to cook).  The thin end was just right for those that preferred theirs medium. 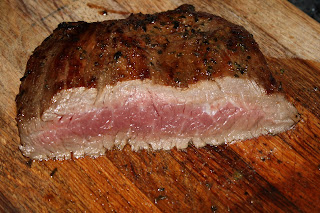 I didn’t get a shot of the potatoes but we used the recipe form Ina Garten for Baked Potato Wedges (with rosemary) and we thought they were very good.  Another fun time and good eats at Almost Heaven South.