This post was to be about grilled pork tenderloin but since I got the meat too salty, I’ll make it about aioli instead.  I rarely remember to make a sauce for meat but finally did and I headed over to site of the sauce/aioli queen, Jenn, from Jenn’s Food Journey and used her recipe for Greek Aioli but substituted Montreal Steak Seasoning (also used on the pork) for the Greek seasonings.  It was a little too tangy for me as made and didn’t have enough seasoning flavor so I added more Montreal and some sugar.


Now, it was not only too tart, but also too salty, from the Montreal, and I decided it would be a good salad dressing but not right for this meal.  I have a long way to go Jenn.  While I do have CRS, I recalled that Chef Dennis over at A Culinary Journey With Chef Dennis had recently posted a recipe for homemade Montreal Steak Seasoning and I had everything but the dill, so I made this Aioli (omitting the salt component):


It was good as made, but a little too flavorful, so I doubled the mayo to get the recipe above and I thought it was very good and it went well with the meat.


We sided the pork with grilled asparagus that was marinated in Ken’s Northern Italian with Basil and Romano dressing and potatoes that were sliced and steamed then grilled with a basting of garlic butter (Emeril’s Essence on some of them). 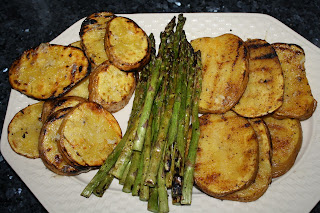 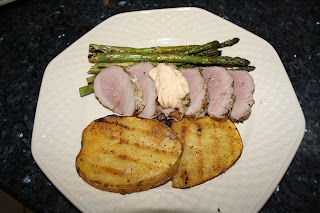 The potatoes were pretty good and similar to roasted but they needed some herbs.  For someone accustomed to fresh grown asparagus, what we had was awful – this stuff can only be used for moist heat cooking (or I’ll just wait til next spring).  I thought the aioli was the best part of the meal – there’s hope for me Jenn – so I put it on everything.