I’d mentioned earlier that Rhett and his daughters spent a couple of days with us on their way to the new home at Ft. Bragg, NC.  While here, he had a couple of things to do including going down to the county seat, Loudon, to get a replacement title for his car.  Since his Harley was being stored in our garage, he decided he’d better exercise it a little, so he donned all of his Harley rider gear and off he went.  Upon returning, he advised he failed in his mission but enjoyed the ride so much he was heading out for another – since Meme was off shopping with the girls for who knows how long – she’s such a typical soft-touch grandmother.


When they all got back I had them pose for a couple of photos - first is Rhett with his four (not a typo) babies. 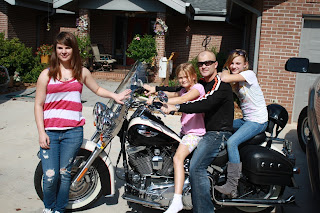 Then with most of the women in his life. 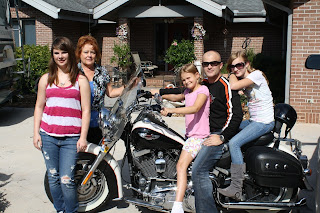 One of Bev’s favorite childhood memories is the Tennessee A&I Fair and she had to take the girls and she insisted Rhett go as well (but she was nice enough to let me babysit the dogs).  Before they left I whipped up a little dinner of reheated ribs – warmed in the oven then grilled to add a crust, grilled potatoes and green tomatoes.  The potatoes were tossed in rosemary infused oil and topped with some hot sauce.  The green tomatoes were drizzled with oil and dusted with Emeril’s Essence – I’d never considered grilled green tomatoes until Larry did them over at the BBQ Grail.  I love fried green tomatoes but don’t do them often due to the calories and mess involved, but these were very good and the effort was minimal.  I also grilled a couple of small pimento peppers which are great on the grill due to their delicious flavor and meaty walls. 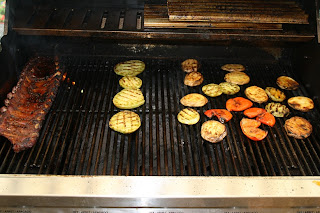 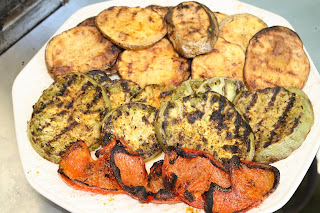 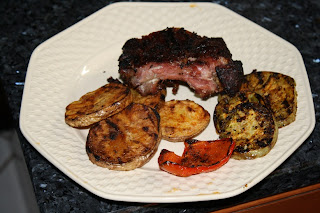 The ribs were perfect for Bev as they were falling off the bone (I considered them overcooked and somewhat dry) and I will definitely cook green tomatoes this way again.  The potatoes develop somewhat of a tough crust when completely cooked on the grill and next time they will basted with flavored butter several times.
It was nice that their visit just happened to match up with my 65th BD – yep I know I only look about 40 (LOL) but I’m now on Medicare and officially old as dirt.
All photos can be enlarged by clicking on them.
Have a great day and thanks for stopping by Almost Heaven South.
One year ago:  New Orleans Trip – The Last Day,Downtown
Two years ago: A Beautiful BBQ Day
Larry
Posted by Big Dude at 4:15 AM