After 6 months of Afgan food, which was mostly beef and lamb, Rhett wanted seafood and since we still had most of what we bought in Maine, we decided to begin with grilled salmon and eat down at the lake.  As it turned out, I had dug my potato crop that morning and while doing it I looked over at the corn and it looked promising - we had some ready to pull.

Rhett and the girls went down to the lake earlier and when we got there we found this. 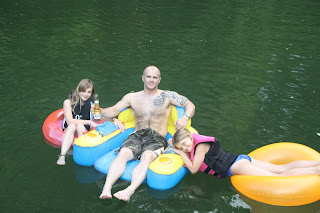 The salmon was cooked using this Al Roker recipe from the June 16, Parade Magazine. 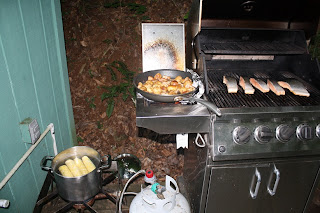 For the mix of Yukon Gold and Red Worland potatoes, I picked out some of the small ones and boiled them until just tender.  They were then browned in butter to develop a little crust.  The Ambrosia bi-color corn was just boiled in salted water and buttered – sounds like a Paula Deen meal doesn’t it?
This is my plate - not too bad for a meal down in the country. 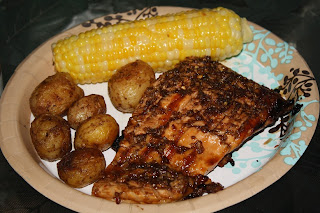 The potatoes and corn were delicious as expected.  This is the second batch of farm raised Scottish salmon we’ve eaten and it is just outstanding fish.  I thought the glaze was very good, but I’m not as big a sweet fan as I am savory - if you like these flavors, I believe you’d like this recipe.
After an evening over the hot grill, the cook had to cool off a little and as always, Sweetie had to go with me. 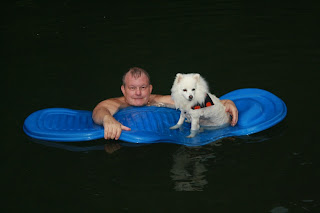 Can you believe this little Yorkie can swim and pull a float? 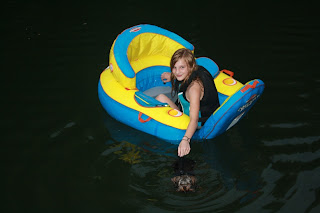 All photos can be enlarged by clicking on them.
Have a great day and thanks for stopping by Almost Heaven South.
One year ago:  BBQ Is Finally Done
Larry
Posted by Big Dude at 4:55 AM